HOME  | About
Burton Upon Trent

Brewing at the National Brewery Centre The William Worthington Brewery is a 25 barrel brewery located in the National Brewery Centre. It was installed in 2011 within the fabric of the museum to replace the 5 barrel ‘Museum Brewery’, the oldest Micro Brewery in the Country.

The brewery utilises the famous Burton upon Trent well water, upon which brewing in Burton was built. The Museum Brewery was originally owned by Bass plc and run by Steve Wellington who came out of retirement to start the two microbreweries in the Bass Museum (now the National Brewery Centre) in 1995. He is credited for saving Worthington White Shield from extinction and both brewed and bottled the iconic IPA. 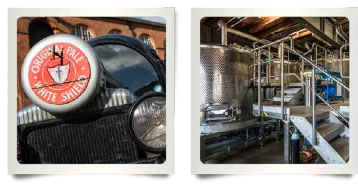 For more information on the Heritage Brewing Company call 01283 777006 or email info@heritagebrewingcompany.co.uk

IN BURTON UPON TRENT Burton upon Trent owes is brewing pedigree to its naturally hard well water (high in sulphates) which accentuates hop bitterness in beer, crucial for brewing pale ales, which Burton upon Trent is so famous for. It is this spring water that The Heritage Brewing Company uses today. Commercially brewing took off in the early 18th century with the improved navigability of the Trent allowing beer to be shipped to Hull and onwards to the Baltic as well as south to London. By the late 19th century, one quarter of all beer sold in Britain was brewed in Burton upon Trent. The Heritage Brewing Company are bringing that brewing history back to life in Burton upon Trent

More about our team A team that enjoys every pint!

As well as the vast knowledge and experience of brewing, the whole team at Heritage Brewing Company has a wealth of experience and expertise which makes them ideally qualified to invent, sell and deliver top quality heritage beers.Between them, the team have an in-depth knowledge of the industry and the ability to bring you the best possible quality beer in perfect condition.